Thank you Russell at South Paris, ME, Energy Office,  Winter of 2018: 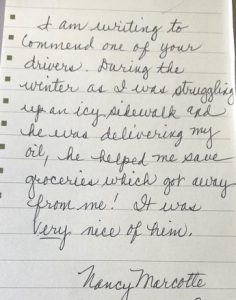 (testimonial received via email August 8, 2014)
Hello, On July 3rd my 17 yr old son Adam took my car to go on a night out with his cousin to see the
fireworks which translated to driving two girls from Winthrop Ma. to their home in Hampton, NH. In
the early hrs of the 4th (around 6 am) they found themselves completely out of bounds, out of gas and
out of money in the parking lot of your Big Apple store in Portsmouth. The two boys were standing
outside the store with a cup asking for change to buy enough gas to get home when they were
approached by the store manager. When they explained the situation your manager informed them that
he could not let them solicit money but he would help them. He then gave them 15 dollars worth of
gas and 5 dollars for tolls, money out of his own pocket, on the conditions that my son call home
immediately and tell me where he was and that someday he pay it forward and help someone else that
needed it. where how and when was to be his decision. On Thursday I stopped in to the store with my
son to pay back the money and I met Ken. He respectfully refused to take my money and said his deal
was with my son. His explanation was it was a two part deal. Part one was to call me immediately to
both put me at ease and to ensure he, at some point, would have to face the music and part two was he
help someone else in need. Stepping up to help someone else whether it was time or money would
help teach him that sometimes the smallest kindness reaped the greatest rewards. Getting his money
back was never part of the deal. He was holding Adam to the agreement they made and was just glad
he got home safe. Ken is a class act and I\’m so glad my son found himself in the parking lot of his
store. And it was not lost on me that he insisted my son called home first. Just thought you should
know. Thank You.
~Anonymous Parent

Dear Richard:
We began using W.B. Mason for supplies in early July. Right from the beginning, we found them friendly and helpful. Allen at W.B. Mason called to set up our account to make sure we received CN Brown pricing. He even asked what products we’ll commonly order (such as receipt paper) and set up a “shopping list” for us on the website, to make re-ordering easy. He placed our initial order right over the phone and it arrived at our store within 24 hours!
It turned out that I miscommunicated one of the items on our first order… I offered to keep the product because we’d need it eventually, but Allen said he’d be happy to have his driver pick it up the next day and credit our account. That’s the true test of a good vendor, in my opinion. As a small business owner, my day is already full, so for him to make the item return effortless for me won me over to W.B. Mason’s service. Their prices are better than we were paying through the previous supplier, and being able to receive product in less than 48 hours is wonderful. If anyone out there hasn’t signed up with W.B. Mason yet, I recommend that you give them a call!
We’re thrilled that C.N. Brown set up this program so that even independent store owners like us can get supplies at great prices with super-fast delivery. You folks have taken great care of us since Day One, and this new program is another example of why we enjoy doing business with C.N. Brown.
Sincerely,

We continue to stay passionate in our goal to support research for treatment an...
View More

Supporting the MDA - One Apple At A Time!

Stop by your local Big Apple Store or CN Brown Service Station from September 1...
View More
Check this out

Sam has been with CN Brown Company for 25 years. We interviewed Sam to hear ab...
View More